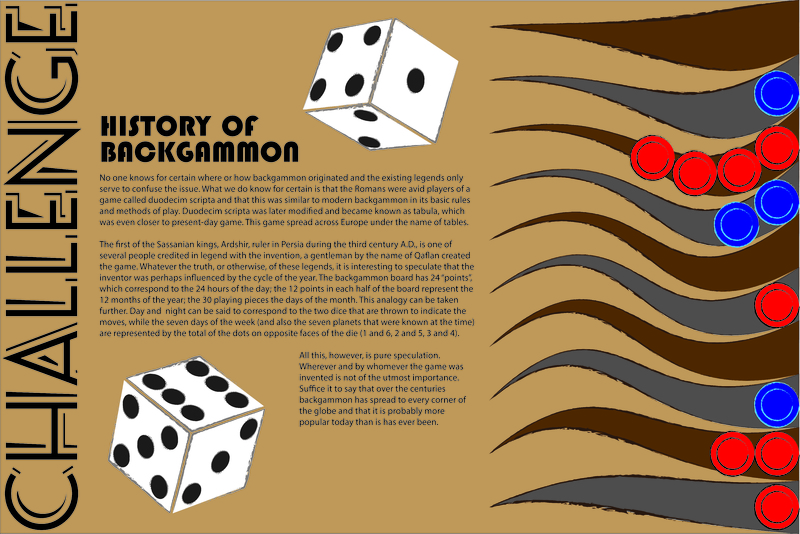 No one knows for certain where or how backgammon originated and the existing legends only serve to confuse the issue. What we do know for certain is that the Romans were avid players of a game called duodecim scripta and that this was similar to modern backgammon in its basic rules and methods of play. Duodecim scripta was later modified and became known as tabula, which was even closer to present-day game. This game spread across Europe under the name of tables.

The first of the Sassanian kings, Ardshir, ruler in Persia during the third century A.D., is one of
several people credited in legend with the invention, a gentleman by the name of Qaan created
the game. Whatever the truth, or otherwise, of these legends, it is interesting to speculate that the inventor was perhaps inuenced by the cycle of the year. The backgammon board has 24 “points”, which correspond to the 24 hours of the day; the 12 points in each half of the board represent the 12 months of the year; the 30 playing pieces the days of the month. This analogy can be taken further. Day and night can be said to correspond to the two dice that are thrown to indicate the moves, while the seven days of the week (and also the seven planets that were known at the time) are represented by the total of the dots on opposite faces of the die (1 and 6, 2 and 5, 3 and 4).

All this, however, is pure speculation. Wherever and by whomever the game was invented is not of the utmost importance. Suffice it to say that over the centuries backgammon has spread to every corner of the globe and that it is probably more popular today than is has ever been.