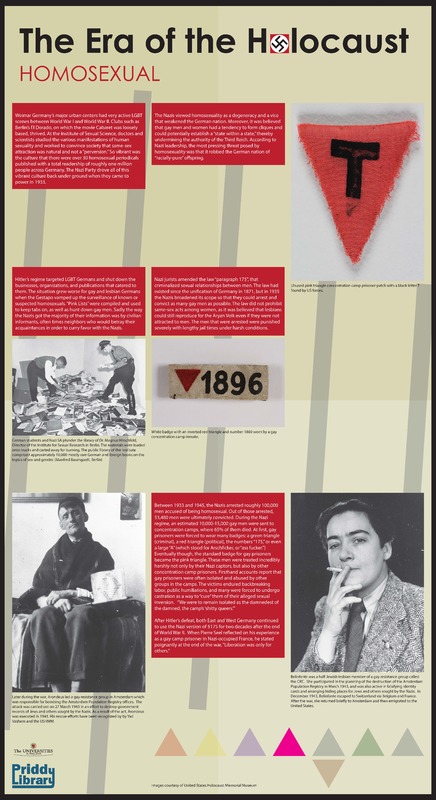 Weimar Germany’s major urban centers had very active LGBT
scenes between World War I and World War II. Clubs such as
Berlin’s El Dorado, on which the movie Cabaret was loosely
based, thrived. At the Institute of Sexual Science, doctors and
scientists studied the various manifestations of human
sexuality and worked to convince society that same-sex
attraction was natural and not a “perversion.” So vibrant was
the culture that there were over 30 homosexual periodicals
published with a total readership of roughly one million
people across Germany. The Nazi Party drove all of this
vibrant culture back under ground when they came to
power in 1933.

The Nazis viewed homosexuality as a degeneracy and a vice
that weakened the German nation. Moreover, it was believed
that gay men and women had a tendency to form cliques and
could potentially establish a “state within a state,” thereby
undermining the authority of the Third Reich. According to
Nazi leadership, the most pressing threat posed by
homosexuality was that it robbed the German nation of
“racially-pure” ospring.

Hitler’s regime targeted LGBT Germans and shut down the
businesses, organizations, and publications that catered to
them. The situation grew worse for gay and lesbian Germans
when the Gestapo vamped up the surveillance of known or
suspected homosexuals. “Pink Lists” were compiled and used
to keep tabs on, as well as hunt down gay men. Sadly the way
the Nazis got the majority of their information was by civilian
informants, often times neighbors who would betray their
acquaintances in order to curry favor with the Nazis.

Nazi jurists amended the law “paragraph 175”, that
criminalized sexual relationships between men. The law had
existed since the unification of Germany in 1871, but in 1935
the Nazis broadened its scope so that they could arrest and
convict as many gay men as possible. The law did not prohibit
same-sex acts among women, as it was believed that lesbians
could still reproduce for the Aryan Volk even if they were not
attracted to men. The men that were arrested were punished
severely with lengthy jail times under harsh conditions.

Between 1933 and 1945, the Nazis arrested roughly 100,000
men accused of being homosexual. Out of those arrested,
53,480 men were ultimately convicted. During the Nazi
regime, an estimated 10,000-15,000 gay men were sent to
concentration camps, where 65% of them died. At first, gay
prisoners were forced to wear many badges: a green triangle
(criminal), a red triangle (political), the numbers “175,” or even
a large “A” (which stood for Arschficker, or “ass fucker.”)
Eventually though, the standard badge for gay prisoners
became the pink triangle. These men were treated incredibly
harshly not only by their Nazi captors, but also by other
concentration camp prisoners. Firsthand accounts report that
gay prisoners were often isolated and abused by other
groups in the camps. The victims endured backbreaking
labor, public humiliations, and many were forced to undergo
castration as a way to “cure” them of their alleged sexual
inversion. “We were to remain isolated as the damnedest of
the damned, the camp’s ‘shitty queers.’”
After Hitler’s defeat, both East and West Germany continued
to use the Nazi version of §175 for two decades after the end
of World War II. When Pierre Seel reected on his experience
as a gay camp prisoner in Nazi-occupied France, he stated
poignantly at the end of the war, “Liberation was only for
others.”