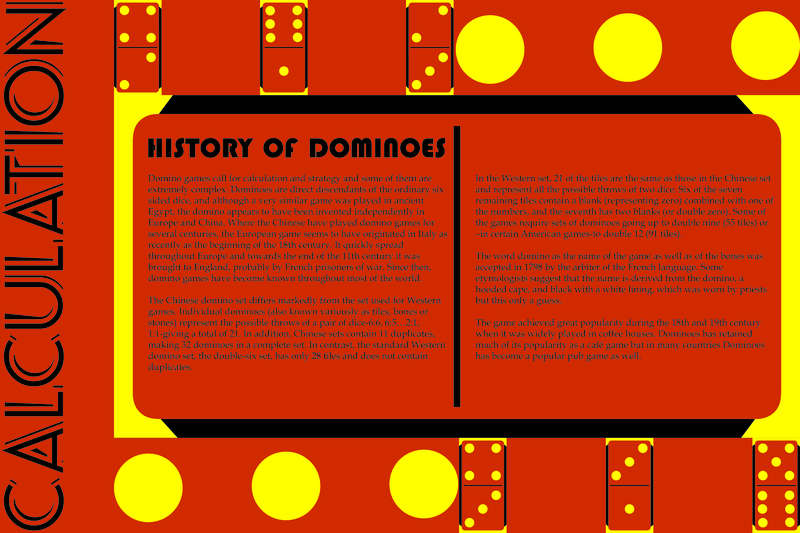 Domino games call for calculation and strategy and some of them are extremely complex. Dominoes are direct descendants of the ordinary six sided dice, and although a very similar game was played in ancient Egypt, the domino appears to have been invented independently in Europe and China. Where the Chinese have played domino games for several centuries, the European game seems to have originated in Italy as recently as the beginning of the 18th century. It quickly spread throughout Europe and towards the end of the 11th century it was brought to England, probably by French prisoners of war. Since then, domino games have become known throughout most of the world.

The Chinese domino set differs markedly from the set used for Western games. Individual dominoes (also known variously as tiles, bones or stones) represent the possible throws of a pair of dice-6:6, 6:5…2:1, 1:1-giving a total of 21. In addition, Chinese sets contain 11 duplicates, making 32 dominoes in a complete set. In contrast, the standard Western domino set, the double-six set, has only 28 tiles and does not contain duplicates.

In the Western set, 21 of the tiles are the same as those in the Chinese set and represent all the possible throws of two dice. Six of the seven remaining tiles contain a blank (representing zero) combined with one of the numbers, and the seventh has two blanks (or double zero). Some of the games require sets of dominoes going up to double nine (55 tiles) or –in certain American games-to double 12 (91 tiles).

The word domino as the name of the game as well as of the bones was accepted in 1798 by the arbiter of the French language. Some etymologists suggest that the name is derived from the domino, a hooded cape, and black with a white lining, which was worn by priests but this only a guess.

The game achieved great popularity during the 18th and 19th century when it was widely played in coffee houses. Dominoes has retained much of its popularity as a café game but in many countries Dominoes has become a popular pub game as well.